Science Fiction is Stranger Than Fiction

It's a funny thing, but when I read A Discovery of Witches (Deborah Harkness) last year I didn't rant and rave about it's amazingness nearly enough. I have felt a longing for the second installment of the trilogy so strong that at times it has presented as a physical ache. I know that sounds insanely over the top but I swear it's true. I mean, the ache didn't really hurt but it was rather annoying... 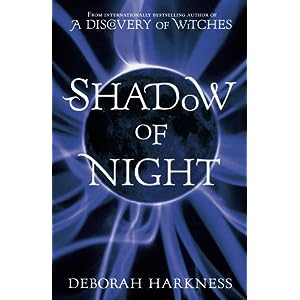 As you may have guessed (you clever little bunnies), I have finally put the ache to rest by reading Shadow of Night, Harkness' second volume. The book is half as thick as it is wide but I read it in four days. Just between you, me and the world wide internet, I spent nearly a whole day reading in bed. It was delicious!

There is a very, very narrow ledge between fantastical and ridiculous, and even though these books are about a witch who marries a vampire and travels through time chasing a magical manuscript, I am here to tell you that Harkness never, ever tips over the edge. I have often said "I don't do boring, and I don't do stupid". Well, I don't do ridiculous either and I bloody love these books. For anyone who wants to read something escapist but feels a bit wary of anything too silly then these are the books for you. Seriously awesome.
Posted by Girl Booker at 1:10 PM 4 comments:

Two Out Of Three Ain't Bad

Hands up who has a list of "Books That Will One Day Cut Through New And Shiny Distractions And Finally Get Read"? I hear that in some corners of the interwebs this list is referred to as a TBR (To Be Read) pile. I had been meaning to read An Instance Of The Fingerpost by Iain Pears for a while, and I am afraid to say that I was disappointed. It was so overly detailed and whiney that I had to give up well before halfway. I was persuaded to try Stone's Fall (also by Pears) instead and was thankfully hooked from page two. Admittedly, there are several passages where Pears indulges his desire for unnecessary detail but not nearly as many as can be found in the first 100 pages of An Instance.... Pears' propensity for detail (most of which is pertinent to the complex, multi-layered plot) is the reason I switched to something different for a spell. I could see myself becoming frustrated with a book I should have been enjoying so decided to put it on hold. I did finish it later and quite enjoyed it. It's not in my top five, but it's something I could happily recommend to others. 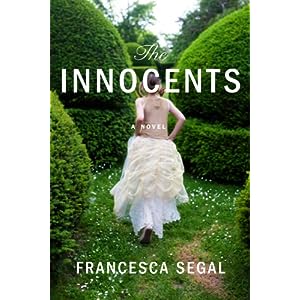 The perfect antidote (aka A New And Shiny Distraction) to Pears bog of detail came along in the form of The Innocents, Francesca Segal's debut novel which is due to be published in Australia this June. Segal is an experienced journalist and her writing style is much lighter than Pears, but her content far more emotionally real. It reminded me how fiction can be an excellent tool for examining truths in the world. I found myself reflecting on questions and situations from my own life, and seeing some things in a new light. The characters felt like real people and I believed their dilemmas and wanted to know how their lives would unfold. What was especially refreshing was that there was not a whiff of the turgid "I have never written fiction before and if I just pepper my sentences with words like 'delicious' and 'lovely' nobody will notice" stench that can drive me to tears of boredom in a first novel. It was well crafted, it flowed, it had depth. Hooray!
Posted by Girl Booker at 2:30 PM No comments:

Huzzah! I have a new favourite book! I read it yesterday and it has got EVERYTHING: melancholy, love, food, discovery, adventure and a wonderful narrative structure that builds in perfect momentum. It has also got pictures. And flaps to lift and little holes so you can see through to a bit of the next page. See? It really does have everything you could possibly want in a book. It is called Jonathan and Martha and is the latest treasure from Petr Horacek. I believe the target audience is 5 years and under and I am just a bit older than that but I don't care; I love it! I may very well have to buy it for my stealthy collection of "Books That As-Yet-Unidentified Visiting Children May Want To Look At When In My Apartment For A So-Far-Non-Existent Event". 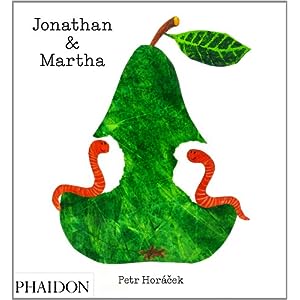 Honestly, the bit where I mentioned the momentum is what impressed me the most. It was pitch perfect which much be difficult when you are limited to only one sentence per page. It's the sort of book an adult can appreciate on a different level from the child they are reading it to. While told in an unbelievably simple way it is a beautiful story.
Posted by Girl Booker at 4:39 PM 2 comments:

I try to read outside my areas of interest and comfort from time to time, so the other day I thought I'd give trash romance a go. People, I tried to give it a go, I swear! However, the fact of the matter is that I stopped fairly abruptly. I feel rather mean splashing the name of the book and author all over the internettle when I have nothing good to say about either, so all I will tell you as a warning is to watch out for a book that has the world "Island" in the title, and to check for the quotes I mention below:

I found the bottom of page 16 questionable, and it certainly made me flinch a little, but in the spirit of open mindedness I decided to continue. So it wasn't the following exchange that put me off:

'Get me a girl,' he instructed as soon as she came on the line. 'And make it quick.'
There was only one thing he needed right now: a fucking blow job.

Charming, no? Nevertheless, I persevered. Or attempted to. The absolute deal breaker was only on page 19, the drama-filled opening of chapter 1:

Loriana Garcia Torres was reading a novel. It was a good one.

Blow jobs and swearing I can handle, stupidly bad writing I cannot.
Posted by Girl Booker at 3:53 PM 6 comments:

When Whimsical Is Bad

A few months ago, I was lucky enough to read an advanced copy of a really excellent book called The Bellwether Revivials by Benjamin Wood. It was creepy and compelling, whimsical and wistful and I wrote a review in longhand because the whole experience made me feel so dreamy that I couldn't bear to use a computer. I never quite got around to copying it out onto this blog and now I have misplaced it. It was an amazingly awesome book; more than just something enjoyable to pass the time. If I had not lost my original review you'd all be able to hear more of my (wonderful, scintillating, enticing) adjectives on the book, but hopefully you get the general idea: Read it!
Posted by Girl Booker at 4:03 PM 3 comments: