Here is the second installment in my tagging post, where I answer some of the 10 questions posed by Brona.

3. What do you think of e book sand e readers?

I am happy to admit that I love actual books; to hold, to crack the spine, to display on overflowing shelves in my apartment. Mostly, however, I love to read in any format. With an actual book, you don't need a contraption to host your reading experience, you just pick up the book and go for it. So the initial outlay of a reader doesn't seem worth it to me because (for now at least) a book is an easier, more enjoyable and cheaper* solution.

I am not opposed to e readers for other people, or even for my future self but I am thus far disinterested. In my opinion there are too many negatives to ereaders and not enough positives. Also, the Australian market for ebooks is not really mature enough yet - I like to wait for the kinks to be ironed out of something by the other schmucks before I jump onboard. Ask me again in six months!

*My bookshop staff discount has something to do with this.
Posted by Girl Booker at 5:20 PM No comments:

This lovely book arrived in my life like a gently spinning and falling snowflake.

Ha! That is NOT TRUE! It’s the kind of book one feels should arrive in such a manner, because it would be just dandy if the simple, quiet poetry of the pages seeped into your real, non-reading life. In actual fact, the book was a bit of a wrangle to procure. I was in a dip with nothing to read, and asked someone (whose previous recommendations sprinkle this blog) to suggest something. This was on her short list but I had to ask someone else if I could borrow it. Not especially difficult, but a whole lot more mundane than that lovely dancing snowflake.

The Snow Child reminded me a little of A. S. Byatt’s writing, in the sense that it reads like a fable or fairytale, although it wasn’t densely packed with information and allusions and ideas. Ivey tells the story with strong, clean, simple lines, like a piece of Shaker furniture. It was a pleasure to read.
Posted by Girl Booker at 4:02 PM 4 comments:

Wherein I Judge A Book By Its Readers

I have never read any Lionel Shriver books before, so about a month ago I took the opportunity to have a crack at The New Republic, a book she wrote about a decade ago but which is only now being published. I guess the fact that I have started this blog post about three or four times in the last few weeks says something about my level of enthusiasm for the book, especially since I only ever get about two lines in before abandoning it for drinking tea, cleaning the bath, or mentally arranging furniture in my non-existent two-bedroom Melbourne apartment with the lovely floor to ceiling windows*.

Now all this might sound as though I didn’t enjoy the book. I did enjoy it, but not enough to rave enthusiastically about it. It was a very clever book in many ways; perceptive, full of puns and black humour. Nevertheless, I felt that it lacked soul. It was Ikea, which is fine, but I generally prefer Chippendale if given the choice. Above all, it confirmed my suspicions about Shriver as an authour who writes “Bookclub Books”.

What on earth do I mean when I say Bookclub Books? Well, I have noticed over the years that there are certain types of book that get chosen over and over again for people to read in their local bookclubs. They appear at first glance to be diverse but on closer inspection are all stultifyingly identical. They are about an Issue. This is good for bookclubs because the issue can be Discussed at the meeting. There is a real dearth of layers and subtleties and sub-plots and quirks and good style; there is just a bit of a story and The Issue. These books are often marketed to look like literary fiction, and I very judgementally become less inclined to read them the more popular they become. They pose as “good books” but in reality sit between chick lit and literature. (Please don’t think I am saying chick lit is bad and literature is good because I genuinely think there is a place for all genres of fiction.) Indeed, some of these so-called bookclub books are rich and wonderful stories and I have loved many of them; I suppose my issue is with the posing; the pretence that something is “literature”** just because it is about a disabled child or a sticky moral dilemma or a woman with dementia. I am bothered by what I see as too much earnestness and hyperbole, and not enough honesty. If we could all just agree that they are passingly ok but not brilliant I would be a lot happier.

In summary: The New Republic is a great choice for a bookclub read, as long as you are in the sort of club that mostly uses the meeting as a chance to catch up on gossip. If you try to talk about the book for the whole meeting you will run out of things to talk about after ten minutes. Nobody will mind having read the book in preparation for the meeting, it’s rather a good story and quite funny, it just isn’t very deep.

*It is in Kew, or possibly Brunswick, and has polished floorboards and a balcony. The rent is also amazingly cheap!
** Whatever the hell “literature” means anyway; we’ll save that discussion for another blog post

I have been tagged by the wonderful and lovely Brona of Brona’s Books. I must admit to having some qualms about this, along the lines of wondering if people really want to read my answers to ten whole questions. Ten! It is not in my nature to back down from a challenge or ignore an invitation (however you want to see it!) but it is also not in my nature to do things the way everybody else does them, so I am going to answer all ten questions, but will spread them out over a few blog posts.

Here are my responses to the first two questions:

1. What is your favourite book to movie adaptation?

Midnight in The Garden Of Good and Evil. The book is by John Berendt and the movie is directed by Clint Eastwood, starring John Cusack and Kevin Spacey. They are both wonderful, complete texts and I honestly couldn't say which I prefer. The movie enhances and improves upon some elements of the book, even though it leaves some things out or changes some things. 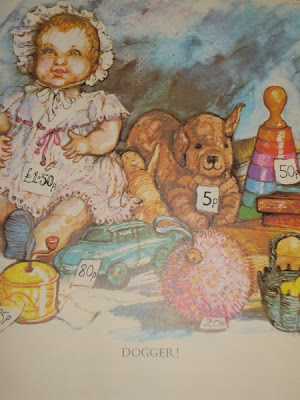 2.What is your favourite animal story?
My cheat answer would be Dogger (Shirley Hughes), about a favourite toy dog that is accidentally put in the jumble sale. It has been one of my favourites since I was about three.

I am beginning to realise how much I rely on the internet, even to talk about and think about books! I haven’t had proper access for about three weeks and found out yesterday it is going to be another two weeks before things get sorted. This means I have been a bad, bad, bad girlbooker. Naughty.

There are a couple of books I read weeks ago and have not posted on here. One of them is What Women Want by Nelly Thomas . I have certainly talked about this book a lot; it weaves its way into my conversations with family, friends and work colleagues on an almost daily basis. It’s a GREAT book – really interesting and insightful. In some ways it is an Australian version of the mega- amazingness that is Caitlin Moran’s How To Be a Woman. I think in terms of content it is a little better. Perhaps this is because both books are products of their environment, and I responded to the Aussieness of Thomas’ work in the same way that I felt a touch put off (at times) by Moran’s Brit-o-centric content. In terms of style I would give the prize to Moran. It is a more polished book (DISCLAIMER: I read a proof copy of What Women Want so can’t provide a completely fair comparison on this point) and felt like a smoother read. I think both these books have a very important place in today’s world; they are frank, thoughtful yet also entertaining discussions about the experiences of women in our society today. Can someone please write another one? – We need more!

Posted by Girl Booker at 7:06 PM No comments: