I am rather embarrassed to admit this, but I just read a book about a women who spends a year in Paris, and discovers a sense of belonging and joie de vivre through food. I know, I know, Cliche City. But it didn't feel like a cliche when I as reading it, it felt like a great book with some honest writing, local colour, and interesting observations on people, place and relationships. And a fair bit about cheese which I would be lying if I said I didn't enjoy.

So, what was the book? Mastering The Art of French Eating by Ann Mah. In true bookie-foodie style, I am going to roast test a few of the recipes. The one that appealed the most was something I have never heard of called aligot which looks to be essentially mashed potato with a lot of cheese folded through it (see below). I am also quite tempted to hunt down a kitschy vintage fondue set in a bid to eat cheese in yet another fashion. 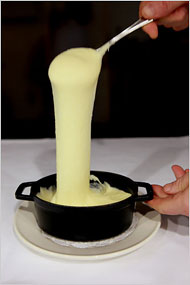 The verdict? Five cheese wheels out of five.
Posted by Girl Booker at 7:41 PM No comments:

I love the promise of bounty that a cookbook provides. Sometimes just flicking through the pages is enough, although ultimately it's all about eating as much deliciousness as you can. I get very excited whenever a new cookbook joins it's fellows on my jolly yellow shelf, but I don't tend to blog about them all that often. I suppose because I am too busy cooking and then eating.

Today, however, I am inspired to write! A couple of months ago my lovely friend Ashleigh gave me a copy of Karen Martini's Everyday. There is a lot to love about this book. I was sold on the roasted winter vegetables recipe very early on, and have made it on a number of occasions, usually tweaking it a bit depending on what ingredients are to hand and it has been completely scrumptious each time. Last weekend the book got a serious workout, providing us with food for several meals. I made a fresh tomato and lime chutney, and dahl. The dahl quantity was so huge it didn't all fit in the pot I was using, so I omitted the can of kidney beans. This meant the dish was rather watery so I made a soup from the liquidy leftovers.

A few weeks ago I made the completely sensational tasting Coriander and Black Pepper Roast Chicken. It was before Christmas but I can still remember what a beautiful, tasty meal it made; incredibly tender chicken with wonderfully balanced flavours. This means I have broken that rule that says people only cook an average of three recipes from each cookbook. In theory, I have just beaten averageness, and need never cook from the book again. In reality, I will OF COURSE be going back for more. A number of the roasted meats and stews in particular look sensational, so coming in to winter I will be calling on Karen to provide us with some dinner delicacies. I took some food porn shots along the way but none of the pictures looked nearly as good as the food tasted, so my suggestion is just grab a copy of the book and cook it for yourself.

Posted by Girl Booker at 8:16 PM No comments:

Despite the massive amount of shelf space given over to self help and fad diets in bookshops, it's not very often that reading a book can change your life.  So it is with a great deal of enthusiasm that I write this post, because I have a very strong feeling that High Sobriety will turn out to be one such book. It actually made me look at my life and patterns of behaviour, and think about how and why I might change them for the better. To be more precise, it did more than make me think about change, it gave me the tools and the courage to enact change, and that is something that doesn't happen very often.

So what's it all about? Interspersed with vats of facts and figures about alcohol consumption, High Sobriety is the story of Jill Stark's year without drinking. Some of the information is confronting, and some is horrifying.  If you are perfectly happy in the knowledge that you drink a bit too much and are utterly disinterested in changing that then I strongly recommend you DO NOT READ THIS BOOK.

As well as the health issues which - worryingly - are more real on a  far lower level of alcohol consumption than I had previously imagined, the book looks at how and why our society normalises excessive drinking. It made me really think about how often I unthinkingly drink because it is the default position. Many of Stark's most difficult moments during the year are when people pressure her to drink because they are uncomfortable with her sober state.

Despite being rather horrified and freaked out at times while reading the book, I generally really enjoyed it. It is such a pleasure to read something well written AND interesting, and boy was it well written. I found myself swept along for the journey, wanting to know what happened next, happy to read for long stretched of time. It was a beautifully crafted book about a fascinating taboo and I cannot recommend it highly enough except to say I give it five lemon, lime and bitters out of five.
Posted by Girl Booker at 7:39 PM 2 comments:

A little over a year ago, I joined The Classics Club reading challenge. At the current rate, the only way I’ll even get close to finishing all 52 books on my list within the allotted five years is if I am sent to  live in exile somewhere with no access to people, TV or new books.  The challenge is Not Happening. The challenge and I are like two strangers set up on a blind date where one of us is waiting at the wrong venue. It’s not that I’m not reading, I’m just not reading anything from the list. I have a pile of three or four newly acquired books on my desk at work. The reason for this is that they do not fit on the shelf with the other 20.  There is a slim chance that I will leave the book industry and go to work on an oil rig, in which case I’ll pack a suitcase full of classics and some spare undies, and be able to finish the challenge. In the meantime, here’s a little run through of what I have been reading.

The Tea Chest
This is a debut novel from Queenslander Josephine Moon and I loved it. If books were food this would be a fairy cake - sweet but not cloying, nostalgic, a little whimsical and something you want to simultaneously gobble up and save for later. It was a book about tea so how could I not love it when my two favourite things in the world are books and tea?!

The Goldfinch
Mag-fucking-nificent. (Brona, please direct your readers to this page if they want an opposing opinion from your own!!). There were moments where I struggled (like Bron) to keep going but it was SO WORTH IT. It was juicy, compelling, exciting, melancholy, disturbing, evocative, thought provoking and thrilling. In a review in Kill Your Darlings journal, Margot McGovern references a BBC interview with Donna Tartt, where she mentions the desire “to give her readers that childhood feeling of breathlessly turning page after page, greedy to learn what happens next while still awarding each sentence the weight it deserves”. She achieves the aim to perfection, making The Goldfinch practically the definition of "unputdownable".


This book by Victoria Finlay has been sitting on my bookshelf, patiently waiting to be read for at least two years. I finally ran out of excuses not to read it, and took it down the other day to begin. I am so glad I did. A small part of me wishes I had read it sooner but I am enjoying it so much right now (haven’t quite finished it yet!) that I cannot begrudge my present self the pleasure it is currently bringing me. It is bursting with fascinating little stories and anecdotes and I keep wanting to share the fascinating facts as I discover them.  It's books like this one that make me realise there is nothing better than some well written non-fiction to inspire and enthuse.