Oh irony! So this post has been sitting, unpublished, in my drafts for about 18 months... Here is is, in all its imperfect glory:


One of the reasons I started this blog was to keep a record of what I had read, but it soon became more than just a record-keep activity. One unexpected bonus was that I was sometimes able to get even more out of my reading experience, because I had to think more carefully about what I was reading. I discovered things about my thoughts and reached conclusions about the books that I otherwise wouldn't have. I didn’t really tell anyone much about the blog, so I was free to write and muse  to amuse myself. I have since found that, as more and more people read Girlbooker (at least two at last count!!!) I often become more and more worried about what the post will sound like, and worried that everything I have written on here is complete bullshit. Sometimes I prevaricate so much I don't even end up finishing the post.

Big Magic (Elizabeth Gilbert) is the book to say “it doesn’t matter what other people think of your creations. Just create for yourself, for the sake of creating something”.  It can be really hard to remember that sort of thing when the whole damn world and it’s imaginary expectations are crowding in on you, which is why I would like to re-read this book every year or so. It was very freeing to let go of the baggage and think I could write something just for my own enjoyment. It inspired me to get amongst it all, and do something. In fact, it’s a good thing I had this blog ready to get into, or I may have unleashed some awkwardly realised craft on the world.  It may have involved found objects. It may have been clay and leather jewellery. It may have been an apple and onion tart.

Aside from making me feel freshly excited about potential projects and other possibilities, I found the book a joy to read. Gilbert covers some really interesting territory. I don't agree with absolutely all of it, but I enjoyed reading about her point of view on things. I really like the way she talks about creative living as being work. Sometimes it is hard, sometimes it is even boring, and only sometimes is it wondrously inspiring. But if it is something you feel compelled to do, and it makes you feel better at the end of each day, then it is important. She also affirms that it is important even if you are the only person to see the finished product. It's about the process for the creator, not about the intended or eventual audience.

There are plenty of other big themes in the book, and I liked nearly all of them. The idea that creativity shouldn’t be expected to pay your rent is one. The idea that getting something out there even if it isn’t perfect is another. I feel like having read Big Magic gave me permission to have fun. It inspired me to get as creative as possible as often as possible. SO I may very well bake that apple and onion tart after all, and keep it to myself.

There is something so deliciously satisfying about reading your way through a big, thick book, and enjoying every second of it. It's sort of like pigging out on chocolate, but with no stomachache afterwards. Iain Pears' Arcadia is one such book. I got so engrossed in the story that on a few occasions I lost a sense of time while reading. Because it is so big and heavy I generally only read it at home, but I made sure I carved out as much time as possible to read it. There are several story lines that one gradually begins to realise may or may not be connected to one another. Trying to work out how is part of the fun. The bottom line is: it is a fantastic yarn.

Despite the length and the multi-threaded narrative, it wasn't an especially dense or difficult book. It was huge amounts of fun, and I could see myself in my former bookseller life trying to sell it to pretty much every single person who walked into the shop looking for advice on what to read. Like sci fi and speculative fiction? Read Arcadia! After a beach read? Try Arcadia! Don't want anything too schmultzy? Arcadia, Arcadia, Arcadia!!!
Posted by Girl Booker at 9:31 PM No comments:

Since Baby Girlbooker arrived on the scene, I have been reading much more slowly than I used to.  For those of you out there who do not have children and cannot imagine why the hell everything takes your child-ed friends so much longer to do, just imagine yourself being forced to look after a tiny drunk person. A tiny drunk person who is so blotto that you need to support them to walk, ask them to repeat everything six times because their slurring is so bad, and help clean up the inevitable vomit and other unmentionable acts.

I'm sure you've all been in this situation before at one time or another, but you probably weren't trying to get dressed or cook dinner at the same time... anyway, I seem to have inadvertently turned this into a waffling, directionless parenting blog. The point is this: I read The Diver's Clothes Lie Empty (due for publication in September 2015) very quickly. And I enjoyed it.

I don't think I have read a book written in second person narrative since my last Choose Your Own Adventure some time in the early nineties. It really ratcheted up the tension and sense of immediacy, and worked surprisingly well. I would have finished the book even sooner but I needed a break from it one night because everything was all feeling too dramatic and intense. Parts of it made me too sad to cry, but mostly I was just dead curious the whole way through to find out what was on the next page. And the next, and the next. It was great, but I think I need to read something where people drink herbal tea and honey next. Since I was about a quarter of the way through A Fortunate Age (Joanne Rakoff), I started thinking about how much I wanted to blog about it. Not that I have anything terribly clever to say about it, just that it was a brilliant, fun, engrossing read. I am not a person who prioritises chores over fun, but this week the apartment is a few shades messier than usual. I just had to take every spare moment possible to read. I had to! It was compelling in the way your new iPhone was when you first got the Angry Birds ap. (Come on, admit it; we’ve all been there).

Ok, so why all the gushing? Well the book is set in New York, and the author clearly loves New York. She totally makes you want to go there because you think your whole life would be strolling through brownstone-lined streets in the sun, talking about poetry and philosophy, before ducking into a small bar for snacks and a cocktail and talking earnestly about music, love and fashion.

As well as the fabulous background, so beautifully painted, are the compelling characters. Somehow, I want to be them (or at the very least be friends with them), even when their lives are somewhere between muddle and disaster on the togetherness scale. Their apartments are smaller, jobs crappier and relationships more halting than anyone would ideally like, but somehow this just makes them seem... I dunno... tragically romantic? Or something. Anyway, Hooray and huzzah for A Fortunate Age. I love, love, loved it.
Posted by Girl Booker at 3:57 PM 1 comment:

The Secret Lives of 101 Thieves

There are a few phrases that get a little overused in the book title area; I've used 3 of them in the title to this post, but the book I've just finished reading, The Porcelain Thief, only uses one. Not that I'm complaining; it was a really enjoyable read. I love a book that's part memoir, part travel adventure, part learning-about-something-new, and part delving-into-history. 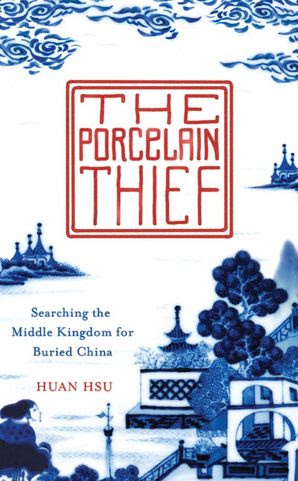 The book is about an American born Chinese man's search for the china that his great-great-grandfather reputedly buried to keep safe from the invading Japanese army in the 1930s. It was packed with information but it never felt too dense or difficult, and it was easy to pick up mid-thread after putting down for a bit. I loved learning about China and also about china. And it made me want to go adventuring.
Posted by Girl Booker at 1:12 AM No comments:

I have about 3 or 4 favourite, living authors. Authors whose books I find so astoundingly wonderful that every 6 months or so, I do a search online to see if one of them has a new book coming out. One of those authors is Patricia Duncker. I think she's ace. And it turns out that she's just written another book!

Like all her work, this book has a great storyline, very believable characters, flowing sentences and big ideas stuffed into little crevices of the narrative. And when I come to think of it, that's really the hallmark of nearly every writer that I greatly admire. I loved it, of course, although I think I did slightly prefer her previous book (The Strange Case of the Composer and the Judge). Nevertheless, I am willing to give Sophie and the Sibyl a rating of 'Many Stars' out of 'A Few More Stars'.
Posted by Girl Booker at 11:31 PM No comments:

I finished Animals (Emma Jane Unsworth) a good three months ago, and have been struggling, on and off, to write about it. I spent a long time tortuously trying to tell what is a hilarious story when recounted by a friend of mine, and trying to make the story mean something in relation to the book. It doesn’t. Well, except for the punchline, which is someone yelling “YOU PEOPLE ARE ANIMAAAAALLLLS!!!”.

The book is gloriously frenetic and absorbing in that “I feel faintly unclean while reading this but I simply cannot stop” kind of way. I would recommend his book to anyone who has ever had a glass (or ten) of alcohol, and anyone who has ever had any kind of: disappointing job, awkward relationship, unhealthy friendship, hangover, or pet cat. You will LOVE it!
Posted by Girl Booker at 4:47 PM No comments: