Tampa. This is a word heavy with meaning in the Australian political landscape. It's an odd little aside that the recently published and hugely controversial book Tampa (Alison Nutting) must have caused a faint stirring of unease in many Australian minds at first hearing of the title. I certainly sensed dangerous territory before I actually knew what the book was about. I highly doubt Nutting is aware of the Australian context but it's rather tidy that such an unrelated incident has added to the swirl of foreboding and uncomfortableness  - in my mind at the very least*.

The book itself is controversial because it is the story (in first person narrative) of a predatory, female paedophile. Lolita in reverse. I was keen to read it because I had an excellent discussion with an enthusiastic and passionate bookseller who completely sold it to me. I also thought it would be interesting to compare with Lolita, which is on my list to reread.

I found it surprisingly easy to read. Despite the very weighty issues that are associated with the book's content, Nutting has quite a breezy, light style of writing and I read the novel in a couple of days. I wonder if this style is part of the problem many readers have. What I mean is that it's flippancy and palatableness in terms of style sits uneasily with the disgustingly distasteful nature of the content. In this sense I can see similarities to Lolita although from memory (I read it in 2000) there is far more intellectual clout in terms of wordplay and literary trickery in Lolita.

I think the book is worth reading. I would even go so far as to say I enjoyed it. I think it raises interesting, uncomfortable question about power, consent and gender. Yet it also had me considering the value of fiction as a method of truth-telling. I honestly don't think I could stomach a memoir that dealt with this stuff, but knowing it is fiction made it bearable. Possibly the only way topics like this can be explored is through the veil of fiction and I really think explorations and discussions of such taboo subjects can only add to our understanding of people and the world.


*Tampa is the name of a boat carrying refugees that was turned back from Australian waters in 2001. The "Tampa affair" has turned out to be the opening chapter in a long and ongoing, highly emotional and fraught saga on refugee policies and treatment of refugees by the Australian government.
Posted by Girl Booker at 7:40 PM No comments:

I have recently acquired two cookbooks based on TV shows. Oddly enough, I haven't really watched either of the shows in question. Normally, I wouldn't have even bothered to look at such books if I wasn't a fan of the accompanying program but I think I have been converted - just like when I discovered it's possible to love a soundtrack without ever having seen the film.

Last night I made the second recipe from The Little Paris Kitchen. I'll be honest - I had watched one episode of this and found it fairly forgettable. I would only think to watch further episodes if I were on a plane and the only other viewing options were Milo and Otis or Deal or no Deal.

But back to the book itself: It's rather nice and I am keen to try lots of the promised treats it contains. Puy Lentil Salad with Goat's Cheese, Beetroot and Dill was a big, fat-arsed winner. I was too lazy to make the dill vinaigrette so just added fresh dill and a splash of white vinegar to the bowl and it was so good; a brilliant balance of sweet, earthy, creamy and crunchy. 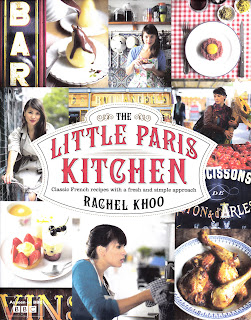 I had never even heard of Spice Trip when Tallboy brought the book home, and still haven't seen any of the program at all. By directly comparing these two books I can say that I like The Little Paris Kitchen quite a lot and that I obsessively love Spice Trip. I have only made one thing from Spice Trip (delicious, easy, exciting flavours) but I have spent a lot of time dreaming and drooling over the pages. There seem to be so many things I want to try; things I had never heard of or imagined but suddenly feel I need in my life quite badly. I made Steak with Grilled Vegetables and Cumin and Garlic Yoghurt a few weeks ago but I will not be stopping there. I have my eye on Black Cherries in Red Wine and Pepper with Sweet Yoghurt but I seem to see something else fabulous every time I open the book, so i suspect I will be raving abut it for some time to come.